March 23, 2019
When my daughter turned 7, my mother decided to bring the dollhouse out of storage and fix it up so that her granddaughter could enjoy it as much as we all had. Little did she know the amount of time and money she was about to expend to complete this project.

The damage to the dollhouse was more extensive than she expected and the remodel requests were more elaborate than she had planned, but still, it was an adventure.

Both side walls needed to be replaced and a lot of structural reinforcements had to be tackled. She decided to add a third floor with dormers and raise the height of the orignal back door. My nephew requested a slide from the kids' bedroom to the playroom and my daughter requested a porch on the side. I wanted a door on the front so that I could close it to keep the inside safe from animals (and dust!). 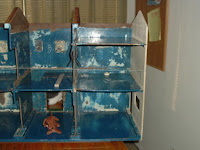 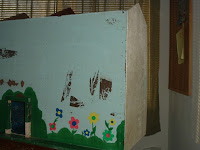 Overall, the house needed a lot of work

To create a third floor, the first- and second-floor ceilings had to be lowered and two sets of stairs had to be added. And, for fun, the second-floor hallways was divided up to add a bathroom where one had never existed (or at least to add privacy to a bathroom that may have existed in some previous incarnation. 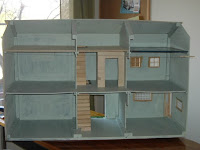 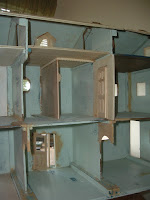 The lower right-hand room has been the kitchen for all three generations of children who have played with this house. Now, it will have a porch added to the side, so we had to add a door.  My aunt is a musician and every member of the family in all three generations plays at least one instrument so, of course, we added a music room. Most of us work at home so we will need an office and what home is complete without a fabulous playroom. 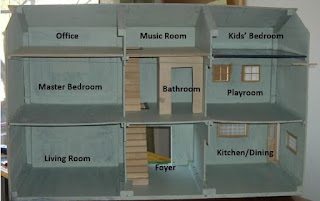 The third-floor is clearly lacking in height so we needed to add dormers. If nothing else, my mother is persistent--she worked on the dormers for weeks trying to get the right height and the right angles. 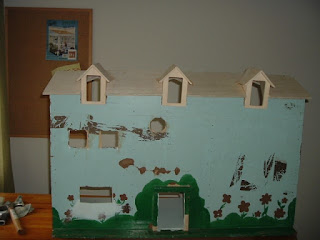 She added windows to every room in the house. 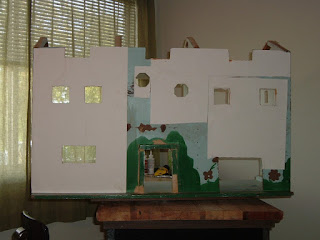 On the interior, she added archways between the rooms on the first-floor because they reminded her of her childhood home in Indianapolis. 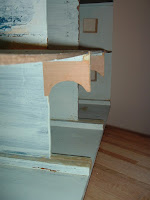 The old house will get three fireplaces so a chimney is a must, and a bay window in the living room will add a little extra floorspace. 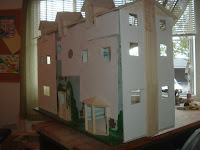 A chimney for the first time ever

Take a close look at the fireplace in the master bedroom: my grandfather made it as part of the original house he built for his daughters. We still have it and it will go into the newly remodeled version without a doubt. 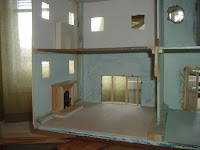 In my next posts, you'll see how each room shapes up. I think you'll like the results as much as we do. 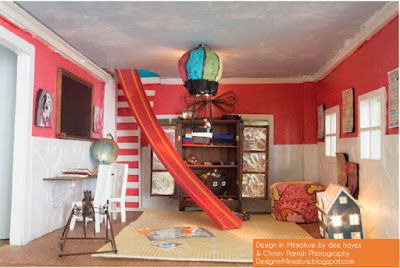 I thought it would be fun to share some of the work we did on each room of our family dollhouse restoration project. It was my first experience working with miniatures (since I was a child playing in the dollhouse) and I thoroughly enjoyed the challenge of making as many pieces of furniture and accessories as I dared.

The playroom sits directly below the children's nursery and by special request of my nephew, we included a slide from the nursery into the playroom.


Now let's see how we did it.
Everything starts with a base. In our playroom, we needed to add a hole in the corner so the kids could slide down into the playroom, and a ladder so that they could get back up into the nursery.  My mother was responsible for all of the construction and lighting in the house. The posts in each corner were part of the original dollhouse construction support; the crown molding is the new structural support she added. The round-wire electrical was attached to the floors and covered with a s… 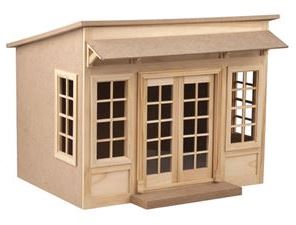 I have been looking for a new creative outlet recently so I turned to an old passion: miniatures. Last year, my family finally finished restoring the dollhouse my grandfather built 60 years ago and since then I've been itching to find a new project. Now I have--the Creatin' Contest from miniatures.com.

I ordered the Serendipity Shed, this year's inspiration piece and I signed up to be certified on the Laser Cutter at my local maker's studio so that I can cut the new pieces that I will need to modify this structure.

My mind has been whirling since I made the decision to work on this project and I love it. I'll post more as I narrow down my options.

I'm so excited to share my plans for this year's HBS Creatin Contest: I'm going to create a bar and patio!

The front of the Serendipity Shed reminds me of a commercial facade. It must do so for others as well since all of the many blogs I've read from others who are entering the contest are also creating commercial buildings. See for yourself...

Shenandoah & StuffOtterine's miniaturesanothertinyobsession
I saw the shed and immediately thought, "That would make a great restaurant." And, then I thought of how I would feel compelled to build a commercial kitchen and I had no interest in trying to make that in miniature. So, what to do when you don't have a kitchen--you build a bar!

I'm picturing a converted warehouse with high ceilings, exposed pipes, brick walls, black trim, an impressive bar, and a garage door open to private patio seating. Here are some of my inspiration photos.

Inspiration photos for 2019 Creatin Contest design
So... How do I ge…